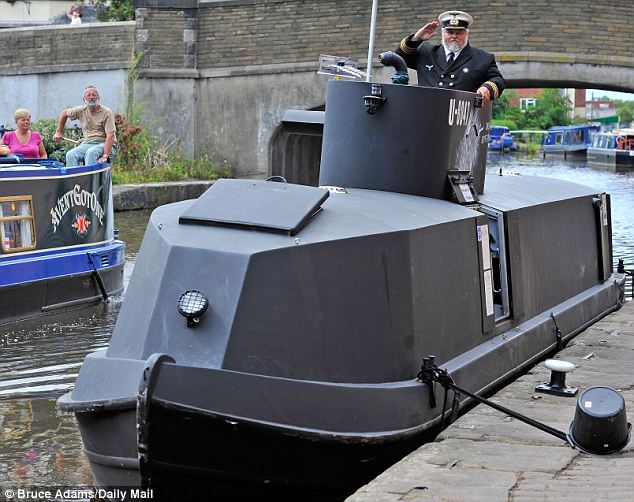 The home-made submarine navigating an English canal: it features a sewer line periscope, pedal torpedoes and a delightfully eccentric skipper

As it winds through the village of Burscough in Lancashire on a hot July afternoon, the Leeds to Liverpool Canal forms a peaceful backdrop for many of the sights you can expect on a stretch of road from rural towpath.

There are brightly colored barges adorned with geraniums, fishermen casting their lines in the water and families enjoying ice cream in the summer sun. And then, of course, there is a portly man dressed in the uniform of a German submarine commander and standing in the turret of a submarine.

“It’s not going to shoot us, is it?” An elderly lady asks as she walks her poodle, but the people of Burscough don’t have to worry.

Oh over there: Richard Williams aboard his submarine replica 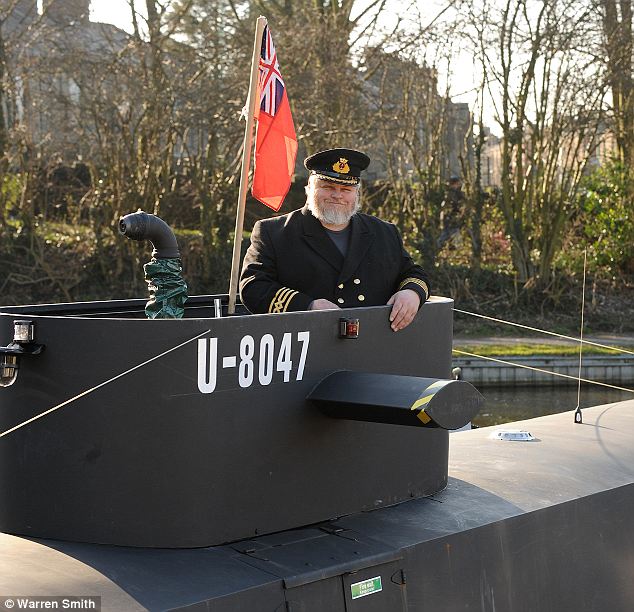 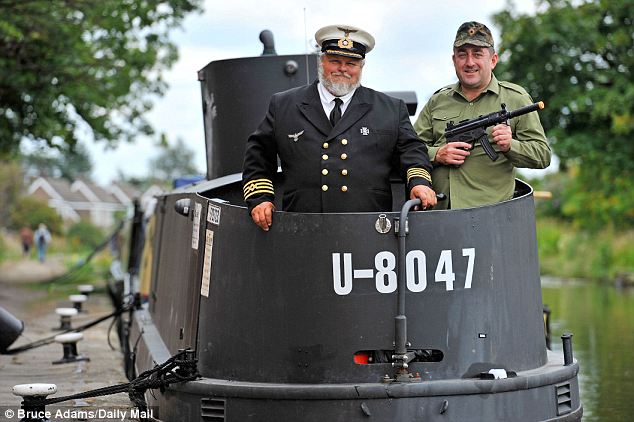 The happiest moor: Mr. Williams, with a crew member on guard

The ship is named U-8047. It’s not a relic of Hitler’s Kriegsmarine, but a narrow old ship converted to a scaled-down replica of the real thing.

Complete with periscope and dummy torpedoes, the U-8047 is the creation of Richard Williams, 51.

This Captain Birdseye lookalike is a former mobility scooter seller who spent over £ 50,000 to build what in recent times has turned out to be something of a nautical nightmare.

When he launched this device last fall, everything was fine, but two weeks ago newspapers reported that it had been the target of thieves and vandals while it was moored in nearby Wigan. . 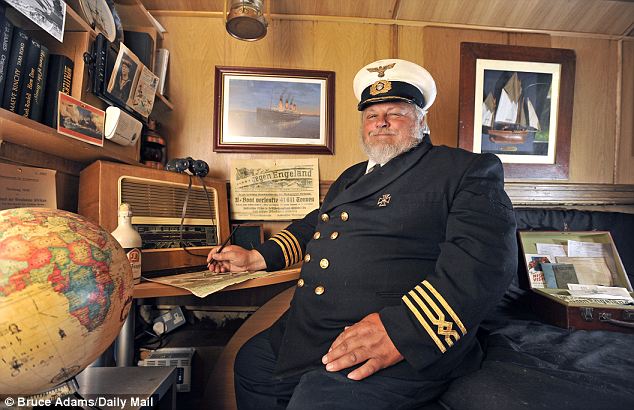 A boat hull: Mr Williams proudly sits in the officers’ quarters of his replica 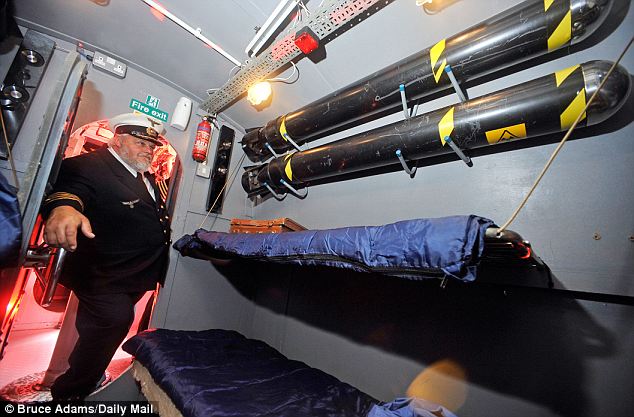 Dedicated: Mr. Williams was never likely to torpedo the idea of ​​building a replica

First, Richard and his wife, Laurel, had the generator and their boxer dog Rambo stolen from the back of the boat. Then they woke up at 4 am to find themselves under fire from a prankster living in the neighborhood armed with a jar of mayonnaise.

“He started bombing the boat and it made a terrible mess,” says Richard. “But what upset us the most was that he shouted that we were Nazis – which we certainly are not.”

It seems to me that the easiest way to avoid being called a Nazi is probably to stop dressing like one, but Richard was never one to be bound by convention.

After leaving Blackpool school to deliver sausages to Wall’s, he started his own business selling products for the elderly and disabled, but the little boy in him never seemed to grow up. 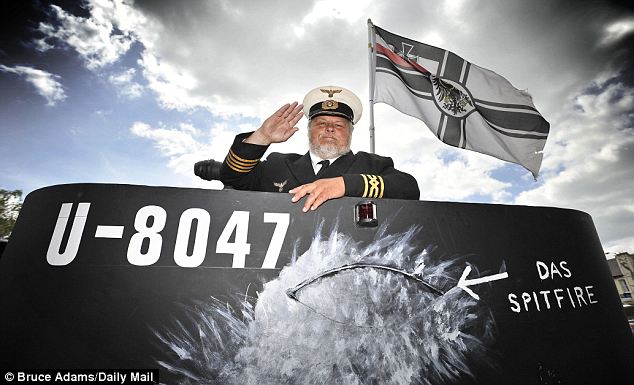 U go: Mr Williams waves to our photographer as the boat is moored at Burscough in Lancashire

As a child he was a devoted Star Trek fan, so ten years ago he turned a spare bedroom in his apartment into a replica of the Starship Enterprise deck.

Or rather, a replica of what it might have looked like if Captain Kirk and Mr. Spock had sat in two old car seats and sailed through space via a bank of used TVs. It may not have convinced many people, but it made Richard happy.

“Every little boy wants a spaceship, but I was 40 before I could have mine,” he says. “Every little boy dreams of having a submarine too, and I had to wait until now to realize that ambition.”

The idea for Richard’s submarine came about by chance when the approach of his 50th birthday last year coincided with the onset of acute angina. His father bought him the houseboat so he could enjoy life at a more relaxed pace, but Richard was soon looking to make more exciting use of it.

Originally, he planned to make it a tribute to the Beatles’ yellow submarine but, once the hull was converted, he found that the required specialist paint cost £ 4,000, so he opted for the black paint, which was much cheaper.

“When it was finished, Laurel said it looked like a submarine. I’ve always been very interested in naval history and that’s where I got the idea to go further. At 45 feet from bow to stern, the U-8047 is one-fifth the length of its actual counterparts and, with the help of a company that supplied props for the Star Wars and Bond films, it’s transformed into a floating museum. 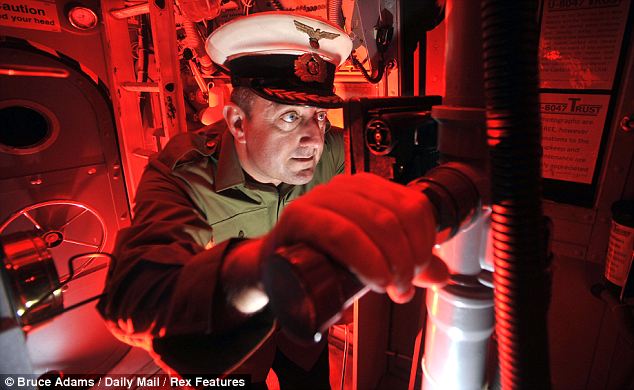 Enemy sighted! David Leafe kicks off on board the ‘sub’

Visitors are asked to board by Richard’s patrols along the towpath. Admission is free, and those who climb under bridges find themselves transported to a dark interior copied from the set of Das Boot, the German film about a legendary Nazi killer submarine.

At one end is the torpedo bay, with the long black missiles made from old drain pipes, and their launch tubes made from little silver pedal bins embedded in the walls.

From there, an oval door leads to the control cabin where visitors learn about Richard’s re-enactment of a naval battle. It begins when Richard invites me to look through the periscope, once a plastic sewer pipe with a CCTV camera on top and an eye-level screen below.

I don’t see anything more menacing than a family of ducks swaying serenely beside us, but Richard suddenly yells “battle stations” and flips a switch that bathes us in a strange red light.

A CD plays the sound of sonar, followed by the shrill ringing of a bell, the bubbling of water and a recording of Richard’s resounding voice: “Dive, dive, dive.” “Normally we have strobe lights and an electronic pump that shoots small jets of water like we’re running away,” he yells over the din.

“But we’re a bit limited in electricity now, because of the generator plug. ”

It is interrupted by a thunderous rumble as we are charged deeply by our imaginary enemy and, as a finishing touch, the boat rocks from side to side. I find out later that it’s thanks to his wife Laurel, who is rocking energetically back and forth on the deck above.

Such effects can be crass, but Richard hopes they will give visitors at least some idea of ​​the conditions endured by the crews aboard the war submarines.

“During World War II there were around 40,000 German sailors on board the submarines and 30,000 of them never returned,” he says. “I think it’s interesting for people to see what the sailors are going through on both sides of the conflict.”

Aside from the mayonnaise incident, U-8047 has encountered surprisingly little hostility, and Richard is keen to see it happen.

The captain’s cabin is full of memorabilia, including propaganda posters and old nautical charts, behind which hides a cleverly disguised iPod. It blows up a carefully balanced mix of WWII recordings.

“We play a German song, then a British song,” explains Richard. “Then we’ll have a Hitler speech followed by a Churchill speech. We don’t want to cause any inconvenience.

Speaking of annoyance, I’m curious about the pretty awful smell that permeates U-8047. Richard points to an air freshener that pumps a pungent male pheromone with a pong reminiscent of body odor.

“The showers on these boats were often used for food storage, so the men would go without washing for weeks at a time,” he says. “I wanted to recreate this, although I’m not sure how successful it is. Children usually say it smells like rabbits.

I can only hope that this aircraft is turned off at night, as the torpedo bay it is in also forms Second Officer (wife) Laurel’s dormitory.

As we ascend to the sun and fresh air above, she explains that Richard is already planning his next getaway – a trip to Liverpool this weekend.

He doesn’t know what dangers there might be along the way but, come on mayonnaise or other missiles, there’s no sign that this pseudo-submariner will surrender anytime soon.